This past Sunday Church of the Suncoast went for two! We went to two Sunday services at 9:30am & 11:00am. It was an awesome Sunday all in all and here are some post Sunday thoughts:

The set up had to be done by about 8:15am with the new Sunday schedule and for the most part we had it all done by 8:15. The set up guys rocked it!!! The only issue we had was one of our three projectors all of a sudden had a big line going down the middle of it. We thought it might have been a cable but it was the projector. So we took the middle screen projector and used it on the side. We then took the middle screen and moved it forward and shot one of our motion lights on it and it looked like we meant to do it. I never freaked once. Go God! 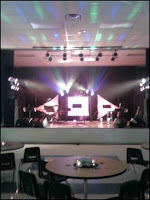 A couple of our staff gals were thinking about how to get people up front so they asked if they could set up some cafe tables instead of the first two rows of chairs. We tried it and the second service really liked them. A few in the first, but they were full in the second. We had water on the tables and some center piece things they did. I think we will try it for a while. Maybe we can have espresso at those tables or something??? Pretty creative way to get people up front and create something unexpected.

We really had no idea what to expect numbers wise and the 9:30 service started out empty but filled by the time I came out for the welcome. The second service was almost what we had the week before with just one service so that was cool. The 9:30 peeps are my heroes though. They have made room for new people to sit and that rocks! I love you too 11am guys!

We had 169 for the day which was a new record for the Suncoast. Go God! And two people accepted Christ! That was cool. It never gets old the number of people that have said "yes" to God here.

The services flowed well. The music, videos, everything flowed. AND, tear down... holy cow! We started at 12:05 and by 1:01 we were closing the doors on the trailer! You guys dominated the tear down! And, I think we can work on it and get it down to 45 minutes!

We had volunteers for all out greeting and children's environments! Volunteers you guys rock! We didn't know how it all would work but you rocked it! Thanks for being so flexible.

Like I said all in all it was a great Sunday. Now, we just need to work it for a few months and fill the seats with our friends, family, and neighbors. I think this Easter at the Suncoast we are going to need a bunch of seats!!!
Posted by Brian A. Moon
Email ThisBlogThis!Share to TwitterShare to FacebookShare to Pinterest
Labels: New at the Suncoast

That's awesome. The entire post made my day. I'm so happy for you guys. I was thinking about you last week.

On a side note: I feel for those people who wake up early to create space and go to that 9:30 service.

I share their pain as I try to wake up later to create space and go to my church's 12:15 service. :)